Congratulations to the creators of Chasing Ice, Citizenfour, Food Chains, Miners Shot Down, and Virunga on winning the 2016 Doc Impact Award. 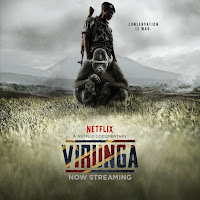 Virunga was produced by Orlando von Einsedel and Joanna Natasegara.

In the 4th edition of Documentary Storytelling, Orlando discusses the role that good storytelling plays in making an impact. "Your film could be about the most important social issue in the entire world, but if it’s a really difficult film to watch, because it's boring for instance, you’re going to limit your audience," he said. When asked how he'd managed to gain the trust of the park rangers, he said, “Early on, they recognized that this film could be a tool to protect the park. It was a vehicle through which to investigate what SOCO and its supporters were doing, but also the end product could show the world what was happening in this park, and try and get the world to rally with the park to protect it.”

For more information on the film, see http://virungamovie.com/.
Posted by Sheila Curran Bernard at 2/25/2016